Classification is sorting species into groups. For example:mammals, amphibians, and so on. The reason for this is because there are so many species still undercover that estimates range from 3 million to 100 million! Scientists sort animals into groups, then might split those groups again and again until they are small enough to observe at once rather than observing each species one by one as there are too many to count.

Living things are classified by their characteristics(features that they have) as lots of animals have the same features. Lions and tigers are alike, for instance, and they are in the same group:mammals. A hummingbird and a robin are similar, and they are in the same group:birds. They are also classified with classification keys like the one below(they really help). All of the groups are: mammals, birds, amphibians, insects, reptiles, fish, mollusks, crustaceans, arachnid, annelid, echinoderms and myriapods. 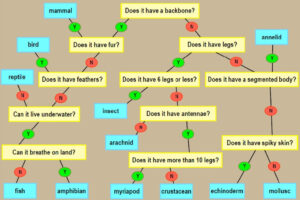 Mammals are warm blooded animals that give birth to live young, the mothers feed them their own milk and they have either hair or fur on their body. Birds have feathers, beaks and lay eggs. Reptiles are cold blooded with dry scales and usually lay soft eggs on land. Fish are cold blooded, live entirely under water and have fins and gills to help them breathe. Amphibians are cold blooded animals that can live on land and in water, born with gills but develop lungs as they grow older. There are many more classified groups that I could describe.

In 1735 (a very long time ago) a Swedish scientist named Carl Linnaeus created classification. His method is still used today but it is slightly adapted:The Linnaeus System.Living things can be classified by eight levels. The number of living things in each level gets smaller until the one animal is left in its 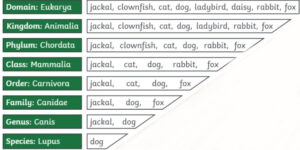 level. This is how a dog would be classified.