Cream the margarine and sugar until light and fluffy. Stir in the flour and vanilla.Roll mixture into approximately 16 little balls and flatten slightly.Press half a cherry into the centre of each biscuit, and place on a greased baking tray.Bake for 10 to 15 minutes at 190 C / Gas 5.Cool on a wire cooling rack.

The River Nile is the longest river in the world. It measures 6,695 kilometres from its source in Burundi, along the White Nile, to its delta on the Mediterranean Sea. Officially, the shortest river is the D River, Oregon, USA, which is just 37 metres long.

The biggest river in the world, measured by the amount of water that flows down it, is the Amazon. On average 120,000 cubic metres (about 20 swimming pools’ worth) of water flows out of its mouth every second.

The longest river of Europe is the River Volga. It flows primarily in a southerly direction through Russia into the Caspian Sea. The second longest is the Danube, flows west to east before entering the Black Sea.

The Mekong is a major river in southeast Asia. It is the twelfth longest river in the world. It begins in the high plateau of Eastern Tibet and flows through China, Burma, Laos, Thailand, Cambodia, and Vietnam.

The Mekong River (known in Tibet as Dza-chu, China as Lancang Jiang and Thailand as Mae Nam Khong), is a major river in southeastern Asia. It is the longest river in the region. From its source in China’s Qinghai Province near the border with Tibet, the Mekong flows generally southeast to the South China Sea, a distance of 4,200 km (2,610 mi). The Mekong crosses Yunnan Province, China, and forms the border between Myanmar (Burma) and Laos and most of the border between Laos and Thailand. It then flows across Cambodia and southern Vietnam into a rich delta before emptying into the South China Sea. In the upper course are steep descents and swift rapids, but the river is navigable south of Louangphrabang in Laos.

The natural resource management issues and priorities differ in each of the countries and the level of development and populations vary significantly. In north-east Thailand, with over 20 million people, the water resources are virtually fully developed and problems are emerging associated with salinisation of arable lands as result of over-clearing of native vegetation and poor irrigation, soil erosion, and declining water quality in the rivers and streams. In Laos, with 5 million people and a much poorer country from a GDP perspective, the water resources are largely undeveloped. Cambodia, with 10 million people, is recovering from decades of war, and in the Mekong delta some 20 million Vietnamese live on some of the most highly productive agricultural land in the world.

In short, the Thai want more water; the Laotions want capital and expertise to develop hydropower for export to Thailand and Vietnam; the Khmers need capital and infrastructure and to secure sustainable fishery resources in the Tonle Sap (Great Lake); and the Vietnamese, while in need of capital for the management of resources, do not want any upstream development to exacerbate salt water intrusion in the Mekong delta during the dry season.

The primary Institution which has been established by the countries which are signatories to the Mekong Agreement is the Mekong River Commission (MRC). For notes on the MRC and how it functions, follow this link. Also see the Mekong Links Pagefor further information and a link to the MRC.

The Mekong system is extremely complex and effects the lives of some 60 million people, many of whom are amongst the poorest in the world. There are many demands made on the river – to provide water for industrial and agricultural development, to sustain subsistence fishing, for transport, to maintain delicate ecological and hydrological balances… Inevitably there are conflicting demands made on the resource and very different views as to how the water should (or should not) be used. The riparian governments, working independently and together through such structures as the Mekong River Commission have a variety of plans for the development of the region, as do community groups, different stakeholders, local and international NGOs, private investment and construction interests etc. For greater detail of the various plans, views and perspectives, see the Mekong Links Page.

THE NILE AND THE ANCIENT EGYPTIANS

The River Nile is about 6,670 km (4,160 miles) in length and is the longest river in Africa and in the world. Although it is generally associated with Egypt, only 22% of the Nile’s course runs through Egypt.

In Egypt, the River Nile creates a fertile green valley across the desert. It was by the banks of the river that one of the oldest civilizations in the world began. The ancient Egyptians lived and farmed along the Nile, using the soil to produce food for themselves and their animals.

Quick facts about the River Nile

Where is the River Nile?

The River Nile is in Africa. It originates in Burundi, south of the equator, and flows northward through northeastern Africa, eventually flowing through Egypt and finally draining into the Mediterranean Sea.

Map of the River Nile from space
Notice that the land is green on either side of the Nile.

Where is the source of the River Nile?

Lake Victoria, Africa’s biggest lake, is generally thought of as the source of the River Nile. On the northern edge of the lake, water pours over a waterfall, known as Ripon Falls, into a narrow opening which some people believe is the beginning of the River Nile.

The true source of the River Nile

Ripon Falls may be the starting-point of the river, but the many streams that flow into Lake Victoria could claim to be the true source.

Much of Lake Victoria is surrounded by mountains with streams tumbling down into the lake. The largest tributary of Lake Victoria is the Kagera river. The Kagera and its tributary the Ruvubu, with its headwaters in Burundi, is now considered to be the true source of the Nile. It is from here that the Nile is measured as the world’s longest river.

What are the two main rivers that flow into the River Nile?

Why did the Ancient Egyptians live near the River Nile?

Most Egyptians lived near the Nile as it provided water, food, transportation and excellent soil for growing food.

Why was the Nile River so important to the Ancient Egyptians?

Ancient Egypt could not have existed without the river Nile. Since rainfall is almost non-existent in Egypt, the floods provided the only source of moisture to sustain crops.

Every year, heavy summer rain in the Ethiopian highlands, sent a torrent of water that overflowed the banks of the Nile. When the floods went down it left thick rich mud (black silt) which was excellent soil to plant seeds in after it had been ploughed.

The ancient Egyptians could grow crops only in the mud left behind when the Nile flooded. So they all had fields all along the River Nile.
Find out about Egyptian Farming

What else did the Nile provide for the Ancient Egyptians?

Reeds, called papyrus, grew along side the Nile. The Egyptians made paper and boats from the reeds.
Find out about Egyptian Writing

The Nile also gave the ancient Egyptians food. They used spears and nets to catch fish. They would also use the nets to catch birds that flew close to the surface of the water.

Another way the Nile helped the ancient Egyptians was in trade. The Nile was the quickest and easiest way to travel from place to place.

What was the area next to the River Nile called?

This area was known as the Black Land. Further away from the river was the Red Land, a region of inhospitable desert.

When did the Nile flood?

The River Nile flooded every year between June and September, in a season the Egyptians called akhet – the inundation.

Why did the Nile Flood?

Melting snow and heavy summer rain in the Ethiopian Mountains sent a torrent of water causing the banks of the River Nile in Egypt to overflow on the flat desert land.

Why does the Nile not flood now ?

The construction of the Aswan Dam in the 1960’s meant that from 1970 the annual flood was controlled.

Who was the Nile God?

Hapi was the Nile god. Honouring a god was very important, so when a flood came the Egyptians would thank Hapi for bringing fertility to the land.

Interesting Facts about the River Nile:

The Nile River is the longest river in the world.

The Nile flows into the Mediterranean Sea.

The largest source of the Nile is Lake Victoria.

The name Nile comes from the Greek “neilos”, which means valley.

The Ancient Egyptians called the river Ar or Aur (black) because of the colour of the sediment left after the river’s annual flood.

Nile River
A fantastic resource about the Nile.

Fact File of the River Nile

Name: The Nile gets its name from the Greek word “Nelios”, meaning River Valley.

Countries: The Nile and its tributaries flow though nine countries. The White Nile flows though Uganda, Sudan, and Egypt. The Blue Nile starts in Ethiopia. Zaire, Kenya, Tanzanian, Rwanda, and Burundi all have tributaries, which flow into the Nile or into lake Victoria Nyanes.

Cities: The major cities that are located on the edge of the Nile and White Nile are: Cairo, Gondokoro, Khartoum, Aswan, Thebes/Luxor, Karnak, and the town of Alexandria lies near the Rozeta branch.

Flow Rate: The Nile River’s average discharge is about 300 million cubic metres per day. To get a more accurate idea about how much water actually flows in the nile look at this image: 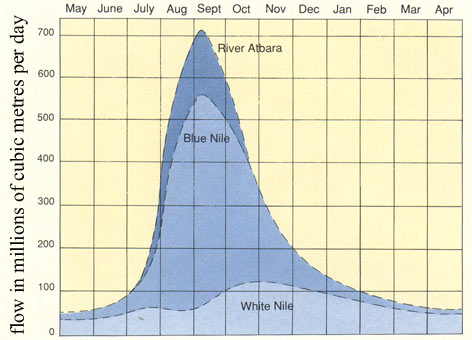 As I get ready for year 5 I’m going to revise things I have enjoyed. I enjoyed working with Miss Wendling and I also enjoyed doing maths. I am proud of achieving the blogs because I have knocked off the year 6s off the lead and won title of blogging queen. I’m excited to become blogging queen in year 5!