I play like a lot of video games. Also I’m really really good at them. Since we have a Nintendo Switch and an online membership we have access to really old games and I’ve played the lot. I’ve completely finished about 14 games ish so yeah.

I’ve played games from every one of these and some played the actual consoles! 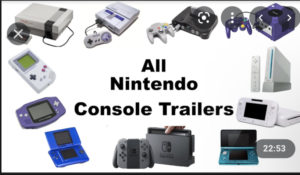 I don’t really play Xbox a lot because I don’t want to. The game I would recommend highly for Switch is The Legend Of Zelda Breath Of The Wild or botw. It’s an open world action adventure game which has a sequel coming out soon (hopefully since the first one was delayed for 4 years) A common release date is October 2022 so about 5 months. Which is great but I won’t have high hopes for a while. A game I playing now is Five Nights At Freddy’s FNAF, it is a horror game so I don’t play it a lot. But total on it I’ve played 1 hour. Some of the games are free so those are the one’s I’m playing but it’s really hard so um I stop sometimes (rage quit).I play a couple games that are over my age rating but to be fair they are completely fine or so says my parents. I don’t play games with realistic shooting or stuff like that. But I have a PC but my brother uses it all the time for his homework so I wait for my dad to finish up at 5 sometimes 5 thirty but it gives me an hour. I have gotten FNAF 2 pretty much free since there’s a really well made Roblox one that I play.

I have like £50 pocket money so I do have enough to buy any game I want so woo-hoo. If I don’t I can just save up since most the games I’m aiming for are either £49.99 or £4.99. There’s a really really good Kirby game coming out called Kirby and the Forgotten Land. I played the demo and it’s Incredible! This is the end of part one so I will be back!

If I can I will make more of these since I really like doing this. Sometimes I don’t just play games I actually do other stuff like reading or drawing or anything else like that. I’m going to move on to game recommendations because the games I’m going to recommend are in three categories. Open world, platformer and creativity. I’m also going to level them on value for money time spent playing and gameplay.
Game number one is Five Nights At Freddy’s Six Pizzeria Simulator (FNAF 6) this game is free so no value for money stuff. The gameplay is good but very difficult when you just start. There’s eight entries to the FNAF series so this is number six. This game is closely tied together with Five Night’s At Freddy’s Eight Security Breach. Basically this place was burnt to the ground twice but still clings on barely. So you need to make a pizzeria then defend yourself from bloodthirsty animatronics from throughout the series. These can be in your pizzeria if you fail a salvage or buy something which has one hiding inside. Or you can buy one using the money you collect from each shift. So basically you own a restaurant and you have to not die in the process. This game is pretty scary so um as a wise man probably once said ‘this is not for the faint of heart!’

Another good one is a massive realease from the time of the Nintendo Switch. It costs £49.99 plus the cost of the Switch which is £249.99 if you don’t have one already. It is pretty costly but is definitely value for money if you’re like me and want to 100% it then this game will have you going for like 3 months if you play it every day. Basically you have a magic hat called Cappy he looks like this. 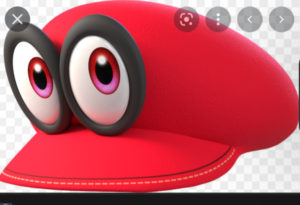 You have use him to travel through many places like the seaside or the cold depths of the snowy kingdom. You can buy costumes using coins or tokens unique to each area. This game is good because theres a lot to do.

My final game recommendation is my all time favourite The Legend Of Zelda Breath Of The Wild. I talked a little about this game in part 1 but it is amazing it won the world wide game awards and is the eighth most sold game in the world! I did some research for that.

I have been to two after school clubs in year 4-archery and fencing. I have to say so far fencing has been my favourite out of the two but I’m going to talk about archery. We were in groups of three and four. There was an odd number so one group had three. Everyone in […]

My time at swimming wasn’t my favorite “sport” as you would call it. I don’t enjoy swimming as much as something like cricket or archery. Basically I like sports on land more than water. From my perspective knowing that I’m going to be doing this in year 5&6 for a half term isn’t fun.

The reason I don’t like swimming is putting my face under I just don’t like it, it feels weird and luckily for me I don’t have to. The second reason I do not like swimming is the instructors. When I went to Godmanchester swimming pool (aka First Strokes) I just hated it, when I saw my brother Jacob swimming I was anticipated and asked to join the first class I enjoyed the second it was ok third I didn’t enjoy it. One night I was getting out the pool and I hated swimming so much that I left the club. The following week maybe probably most likely.

To summarise I didn’t enjoy it.