I have been to two after school clubs in year 4-archery and fencing. I have to say so far fencing has been my favourite out of the two but I’m going to talk about archery. We were in groups of three and four. There was an odd number so one group had three. Everyone in our groups took turns to take two shots each.

We had two teachers Mr Bell (who teaches fencing and occasionally dodge ball) and for most of the time Mr Ray. Both were good and both taught me better archery. The area I worked in was large and I managed to work well. My team won a competition at one point which was cool.

I really enjoyed archery and I have certainly improved. 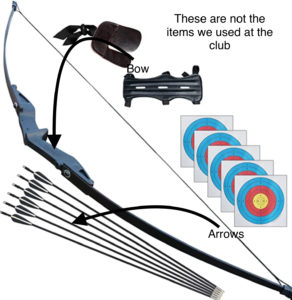 One thought on “My first after school club, Archery”