The Roman Empire ruled England for roughly 500 BC to 400AD. There was no police so people would ask there friends to help them catch a criminal. The punishment for murder would be death and the punishment for treason would be death or be imprisoned. If you accused  someone the Vigiles would hunt you down and give you a punishment. They would deal with wrongdoers such as thieves and slaves, who ran from ther owners. Did you know the Vigiles would put out fires because there was no fire brigades. The emperor was protected by the Praetorian guard. When the Romans left Britain the Anglo-Saxons and Vikings raided.

The Anglo-Saxons ruled England for roughly 410BC to 1066BC.There was still no police so people would shout for help. If you committed murder you would have to pay 100 shillings but if committed a crime twice you would have your hand chopped off. If the judge could not decide if you were guilty or innocent then you would have trial by ordeal. Trial by ordeal is when you step on burning hot coal or when you put your hand in boiling water to find a stone. If you your feet or hand heals in three days you are innocent because God saved you because your not guilty. Interestingly, children are considered as adults at the age of ten.Did you know that when the Anglo-Saxons left the Tudors came to Britain.

The Tudors rule from 1485BC to 1603BC. The punishments were all about public humiliation. For example, a punishment could be the scolds bridle, which stops you from talking by having spikes on your tongue.Another punishment is locked in stocks , which locks you in a uncomfortable position for a long time. This is what they look like. 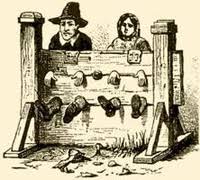 A punishment for being drunk in public could be put in a barrel of beer.If people were accused of being a witch they would be dunked into a lake and if the drowned they weren’t a witch but if you floated back up you used black magic so you would be burnt at the steak. Once the Tudors left the victorians ruled Britain.

Victorians would have public hangings and people would sell food while they get hanged. The first policemen were introduced and they were called Peels.Criminals would be transported to Australia. You would have to be on a cold damp boat for six months. Surprisingly, most of the people where as young as nine years old. A lot of people died on the way and if you survived the journey you would go to a workhouse. A workhouse is a place where the homeless people went for a roof and food :they had to pay 50 pounds. The workhouse would let them work for money but they only earned 20 pounds. If you left the workhouse you would have to come back because you would not know a thing about the wild animals of Australia .

The war lasted for 7 years. It was between 1939 and 1945. The most common crime was theft but world war 2 changed that to looting because lots of buildings were bombed. The punishment for looting was a fine or a short prison sentence. If you were caught selling on the black market you would be fined or imprisonment. The murder was more common so the consequence could be death.  There still was police and police duties increased because of the amount of crimes committed. New laws were introduced. For example, air raids, blackouts and rationing. There was not many woman officers and the police were called blackout bobbies. They were called this because they made sure that no light from houses and shops could be seen to stop German bombers from flying overhead. Children were evacuated to the countryside. This is what a German bomber looked like. 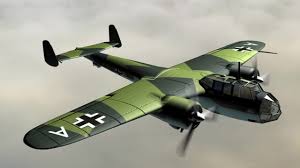 The crime and punishments have changed a lot throughout history. There are new punishments, which are fair ,for example murder would not be death it would be a lot of years in prison. There’re also lots of machines to prevent crime. For example, CCTV because they would have footage of the horrible crime so they would be found. There are lots of new crimes as well.For example, speeding and car theft.

Very good range of information for each era in history.  You have researched this topic well and I can see you have chosen specific vocabulary choices to suit the purpose of the writing.  Well done Theo!